7 benefits of coconut oil for your skin

Coconut oil has been a staple in the kitchen for years, but our love affair with this tropical plant-based oil is now extending to our beauty routine.

Fans of coconut oil have been cooking with it for years, and now dermatologists and natural product enthusiasts are hailing its addition to beauty routines.

Research has found coconut oil may have antibacterial properties when applied to skin, while other studies have found it may reduce inflammation.

Here are our top seven benefits of coconut oil for your skin.

“It is comprised mainly of medium-chain fatty acids, which have the ability to penetrate skin deeply to moisturise and act as a protective barrier against the ageing effects of environmental and free radical damage,” Catherine says.

Coconut oil can be used as a cleanser

Gently massage a little on your face and neck, and cleanse again with your usual cleanser.

Dab on a light layer with your finger before bed to hydrate under the eyes.

Soften hands with some coconut oil after washing dishes.

Many swear by it as an affordable and fragrant hydrating body lotion or massage oil.

For those cracked heels, put it on before bed and cover with cotton socks.

“It is a great all-over body treatment after a bath or shower and is fantastic for dry areas like heels, cuticles, elbows to soften and restore,” Catherine says.

Catherine says its rich supply of fatty acids such as lauric, caprylic and capric, combined with iron and skin-nourishing vitamins such as K and E, make it “a powerful natural support for healthy skin of all types”.

Relieve dry, itchy patches of skin by rubbing on a light layer of coconut oil.

Research has found it can be helpful in reducing symptoms of eczema.

Try it as a natural and sweet-smelling alternative to shaving foam for legs.

It is not all suitable for all skin types

As with any product, know your skin before applying coconut oil.

Catherine and Lilian agree that not every skin type is suitable.

“Coconut oil has one of the highest comedogenic ratings, which means that it has a propensity to clog pores and potentially lead to acne breakouts in some people,” Catherine says.

“Do not apply on broken skin as it can cause skin irritation,” Lilian says. 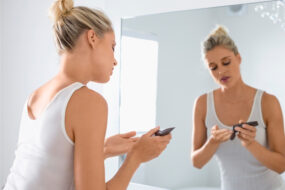 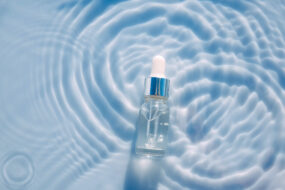