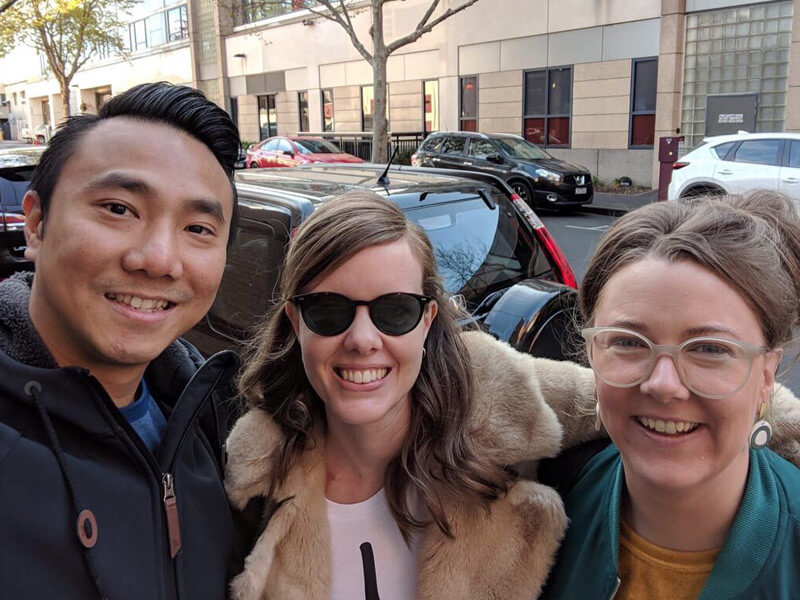 The awful truth about bowel cancer and younger people

At just 33, fit and seemingly healthy, Sarah Foster was stunned when she was diagnosed with incurable bowel cancer. And she is among a surprising number of younger people battling the disease.

The 35-year-old Melburnian was diagnosed with stage 4 bowel cancer two years ago.

Highly active with a love of dance, no prior health scares or family history of bowel cancer, the discovery was a huge shock.

“It was really hard to be in a body that screams youth and vitality and then to get that diagnosis,” says Sarah. “I really did not think bowel cancer would happen to me.”

She had seen her GP after feeling exhausted, and suffering intermittent backache – which she put down to exercise overexertion – and night-time abdominal pain and nausea.

Originally her low iron was treated but when the levels didn’t improve, Sarah was referred to a gastroenterologist.

He ordered a colonoscopy, which showed a tumour in the caecum of her bowel. “It was completely obliterated by the tumour,” says Sarah.

The cancer had perforated Sarah’s bowel, spread to her lymph nodes and migrated to her liver, both lungs and the wall of her abdomen.

“I’m a high achiever when it comes to getting cancer really badly,” she jokes.

Feeling better for the first time in 2020 🎉 I had surgery on Tuesday – the Colorectal surgeons removed both of my ovaries which had become cancerous (my left had rapidly grown into a large tumour), cancer in my pelvis and along my abdominal wall and drained 3 litres of fluid from my abdomen. In the month prior to Tuesday we learned my chemotherapy FOLFOX 🦊wasn’t working on the cancer in my abdomen. We waited to hear if the surgeons could operate on me. I got really sick. Trips to ED. Long nights and days in pain and discomfort. Living with uncertainty as we waited time to pass, waited for a plan. I woke up on Tuesday with an epidural for my pain and knew immediately I felt better than I have in months. Over the last few days I’ve joyfully walked again, had a semi-religious moment eating my first bite of Vegemite toast, found myself again with a clear head, nausea free. St. Vincent’s Hospital have saved my life again and I plan to write an open letter of thanks to the Teams who worked to get me through this – watch this space. Also Justin and Claire, with me to the hospital repeatedly, in the trenches of uncertainty and worry, driving me around like proper paramedics avoiding pot holes and tram tracks that caused me excruciating pain, sitting with me for hours when I couldn’t do or be anything. And Mum, by my side the last 4 days in hospital. I’m home tonight, Day 4 post op and it’s a bloody miracle. I’m taking a moment to enjoy my rapid, uncomplicated recovery (so far) in the context of great complexity. So grateful to be home. #nevertooyoung #bowelcancer #surgery #livingwithcancer #blessed?

Sarah’s cancer is incurable and she will need chemotherapy for the rest of her life.

Yet her healthy-looking appearance makes it hard for people to fathom how unwell she is, and she has also experienced this disconnect.

“There’s an abstraction that happens when you look well and you’re not on the inside,” says Sarah.

“I think sometimes it’s just beyond our imaginations to fully understand and know this is what we have.”

Sarah is undergoing her 29th cycle of chemotherapy. She receives treatment every fortnight, spending four hours in hospital before going home with a pump that infuses a bottle of chemo into her for another 46 hours.

Cycle #29: leaving St. Vincent’s this arvo with chemo “to-go” in my sequined bum bag. My platelets were too low last week to have treatment but have bounced back. Inversely my neutrophils are still borderline after a 3 week interval 😬 Trying to find a balance across chemo dosage, treatment consistency and what is safe for my body is the tricky dance we do every two weeks 💃 #cancerinthetimeofcovid #cancerdance #blessed? #uncertainty #nevertooyoung #livingwithcancer #folfox #bowelcancer #folfiri #chemotherapy #chemo #fuckyoucancer #bowelcanceraustralia #chemocycle29 #platelets #neutrophils

Bowel cancer cases on the rise in younger people

Often regarded as an older person’s disease, one in 11 Australians diagnosed with bowel cancer is actually under 50.

It’s the most common cause of cancer deaths in Aussies aged 25 to 29 and, along with brain cancer, those aged 30 to 34.

And rates are increasing, with bowel cancer cases in 15 to 24-year-olds rising 186 per cent in the past three decades.

How to identify bowel cancer signs and symptoms

Dr Newstead says young people and their GPs need to recognise and promptly investigate symptoms to rule out bowel cancer as an underlying cause.

Symptoms suggestive of bowel cancer should be followed up with colonoscopy within 30 days.

If you experience any of these symptoms for two weeks or more, see your GP:

“It’s also important for people to know their family history – it’s simply not good enough to say that grandma died ‘from something, but we don’t talk about it’,” says Dr Newstead.

Sarah emphasises the importance of tuning into your body and trusting your instincts.

“Know your body, replace fear with curiosity and then be tenacious about following up anything that doesn’t seem right,” she says.

Visit Never2Young for more information about bowel cancer in younger people or call the Bowel Cancer Australia helpline on 1800 555 494. Follow Sarah’s cancer journey on Instagram at scfostah and cellsbehavingbadly.

June is Bowel Cancer Awareness Month and Red Apple Day on June 17 supports work to treat and research the disease.