The lowdown on energy drinks

Energy drinks are a popular pick-me-up, but there are a few things you need to know to enjoy them safely.

Walk into any milk bar or convenience store and you’ll find a fridge filled with an overwhelming choice of energy drinks.

They’ve become a popular quick fix for anyone feeling a little sluggish.

But energy drinks have been under the spotlight in recent months, particularly when it comes to children and teenagers.

What is an energy drink?

Regulations around the manufacture of energy drinks include that they must contain no less than 145 mg/L and no more than 320mg/L of caffeine – similar to the amount of caffeine in a cup of instant coffee.

They also usually have vitamins, amino acids such as taurine, and the flavourings, colourings and additives usually found in soft drinks.

What are the health concerns around energy drinks?

The UK government is considering a ban on the sale of energy drinks to children, blaming them for contributing to childhood obesity.

Researchers at the Telethon Kids Institute are also studying the impacts of energy drinks on young people.

In a report, chief investigator Dr Gina Trapp notes energy drink sales increased more than 600 per cent between 2001 and 2012, and have been linked to increased blood pressure, insomnia, liver damage, seizures, anxiety and hallucinations.

“While energy drinks are marketed to improve the body’s performance, they pose a distinct health risk, above that of soft drinks,” writes Dr Trapp.

An Australian study found consuming more than two energy drinks a day is linked to a fast heartbeat, heart palpitations and chest pain in adults.

For their part, manufacturers recommend adults drink no more than 500ml of energy drinks a day.

“Caffeine acts as a stimulant to boost concentration and ward off fatigue,” says Lisa Donaldson, of the Dietitians Association of Australia.

“But it’s important to keep in mind that while an energy drink may have the same caffeine as a cup of coffee, they usually come in larger serving sizes than your coffee cup.”

She says most people can safely consume up to 400mg a day of caffeine.

“But for children, pregnant women and those who are sensitive to caffeine, have less. Energy drinks are unlikely to pose a real hazard in small amounts but be wary about over consuming these drinks.

“If you are in need of a pep-up, a milk-based coffee is a better bet.” 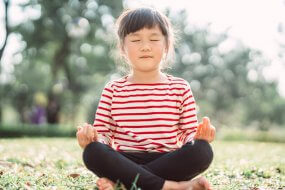 How meditation can help kids’ minds