HEALTH  /  Dieting  /  Weight loss myths: How fat is lost from the body

Weight loss myths: How fat is lost from the body

Have you ever wondered where the flab actually goes when we lose weight? As House of Wellness TV host Jo Stanley discovers there’s a number of common misconceptions when it comes to the fate of fat.

It seems we aren’t the only ones getting it wrong when it comes to weight loss.

As research from The University of NSW shows, many health professionals, including doctors, dietitians and fitness trainers, were also under the misguided belief that fat simply ‘turns into’ energy or heat, or breaks into smaller parts and gets excreted.

As The Fit Pharmacist Holly Louise explains to Jo, in reality the body stores excess calories we consume in our diets as triglyceride molecules, which consist of three kinds of atoms – carbon, hydrogen and oxygen.

“For people to lose weight, their triglycerides have to break up into building blocks, which happens in a process known as oxidation,” she says. “When a triglyceride is burned up, the process consumes many oxygen molecules while producing carbon dioxide and water as waste products.

“That might sound complicated but the scientists found that during weight loss, 84 per cent of the fat that is lost turns into carbon dioxide and leaves the body through the lungs, while the remaining 16 per cent becomes waste.”

In a nutshell that means we’re exhaling the majority of our fat says Holly, adding the study illustrates the importance of exercise in any weight loss program.

“When you go on a low-calorie diet, the brain slows down your metabolism to conserve energy and keep the body functioning on fewer calories. In other words, the body adjusts the number of calories it burns based on loss of calories consumed and if you aren’t burning enough calories in comparison to the amount you are eating, you won’t lose weight.”

“The best way to lose weight – and prevent significant metabolism slowdown – is to avoid drastically reducing calories and by increasing the amount of exercise you perform. This will keep your metabolism healthy and allow you to lose weight while eating more food!”

With obesity in Australia one of our biggest public health challenges, it’s a message 32-year-old nurse Cassie Howland is taking to heart.

Mum-of-two Cassie says she doesn’t remember a day when she didn’t actively worry about her weight, but sick of yoyo dieting and restricting calories, she’s now committed to a sensible diet and exercise program and is seeing results.

“I’ve already lost three kilos and I determined to stick to the program,” Cassie says. “My husband Matt and I would love a third child but I want to be a healthy weight before getting pregnant.”

“I also want to set a good example to my kids and I don’t want them picking up any negative eating habits.”

Catch up on the full episode of The House of Wellness TV show to see more from Giaan, Ed, and the team. 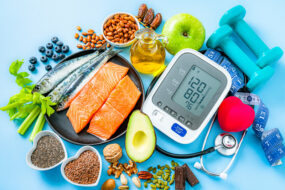