HEALTH  /  Nutrition  /  Beetroot – the power behind this superfood 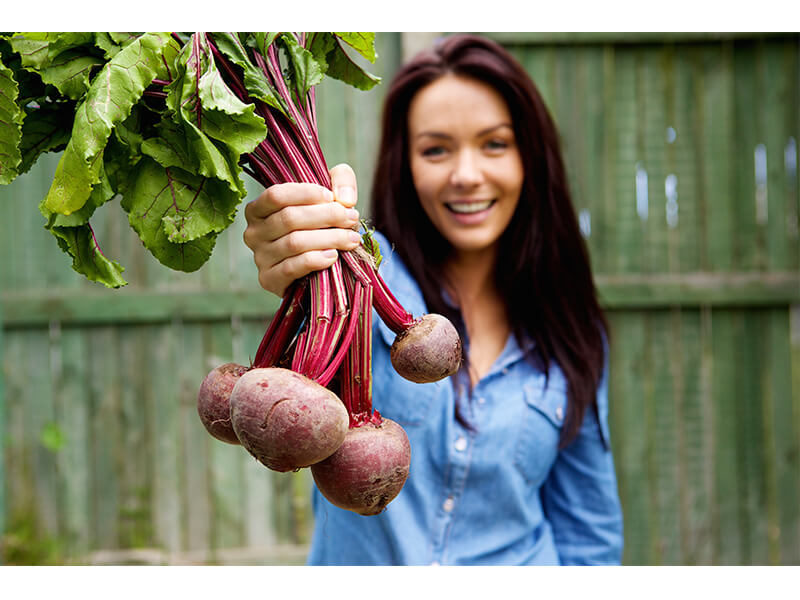 Beetroot – the power behind this superfood

Demand is rising for the humble beetroot, amid claims it can help protect our hearts, bones, brains, bodies and improve our sex lives.

Aussies love beetroot slices in a burger or a sandwich. We grate it into salads, roast it with meat, add it to pasta – even cook it into chocolate cakes for a dash of goodness.

We’re not the first to feel a buzz for the sweet root vegetable. It is said ancient Romans took beetroot as a treatment for fevers and constipation.

Hippocrates, hailed the father of medicine, used its leaves as bindings for wounds. And in the Middle Ages, digestion and illnesses of the blood were treated with it.

More recently, it has taken on “power food” status with elite athletes hailing beetroot juice as an ergogenic supplement that can provide the winning edge.

Dietitian Rebecca Flavel says there are many reasons we should be incorporating beetroot, and its blood-red elixir juice, into our diet.

“Beetroot falls into the same family as spinach and chard, and contain vitamins, minerals, antioxidants and fibre. It’s also high in vitamins C and B6, folate, manganese, betaine and potassium,” Ms Flavel says.

“Beets are rich in a unique source of phytonutrients called betalains, which have powerful antioxidant, anti-inflammatory and detoxification properties. They’re also rich in nitrates, which help muscles use oxygen more efficiently.” It’s this fact that has athletes and scientists heading to the lab to find out more.

“Keep in mind these are naturally occurring nitrates, which are healthy and not the ones found in processed foods, like hot dogs and lunch meats,” Ms Flavel says.

Another Australian study suggested adding the nitrate-rich beetroot juice to our workouts can enhance athletic performance in both short duration and more endurance-based events.

University of Western Australia Associate Professor Peter Peeling and colleagues from the Australian Institute of Sport studied the influence beetroot supplements had on physiological and performance outcomes of elite kayakers.

The study revealed the beetroot supplement improved the energy needed to maintain their speed by up to five per cent. The more beetroot juice consumed, the better the athletes’ physical performance.

“The relatively small performance changes recorded are clearly relevant,” Dr Peeling says. “In the 2012 London Olympics, the margin between gold and silver medals in the men’s K1-1000m and the women’s K1-500m races was 0.3 per cent and 1.0 per cent.

“Beetroot juice is also known to improve explosive power and activate fast-twitch muscle fibres, although we’re yet to fully establish why,” he says.

Elite athletes would likely need to use beetroot juice for several days in a row to get a meaningful boost in blood nitrite (and hence, performance). But for the rest of us, a single dose about two-three hours before exercise may add an extra per cent or two.

Beets have become so popular, even in sports, that seeing an athlete with red beetroot-stained lips at an endurance event is no longer unusual! – Associate Professor Peter Peeling

While eating the root veggie regularly is good, you can also supplement with beetroot powder.

Also known at beet powder, you may have noticed it increasingly popping up in smoothie recipes and pre-workout shakes.

The ruby red powder, which is made from dehydrated ground beets, contains higher levels of nitrates that the veggie.

How to add beet powder to your diet:

Beetroot may help protect us from premature aging. Antioxidants in beetroot neutralise free radicals, while lycopene in the juice helps keep the skin elastic.

Beetroot also have high levels of vitamin C, which is known for its anti-aging properties.

Use the juice for a detox

Improved mental health may be another added bonus. Betalains in beets have been used to treat depression and the vegetable contains tryptopahn, which relaxes the mind and creates a sense of feeling good.

And for your love life

And last but not least, what about the between-the-sheets benefits?

Back to those ancient Romans, and it’s said they used whole beets as a primitive Viagra, eating them and drinking the juice when they wanted to boost their libido.

Beetroot contains the mineral boron, which is directly linked to the production of sex hormones.

That’s on top of the nitric acid produced in the body when beetroot is eaten, increasing blood flow and sex drive.

Save the best bits!

Not only do they make a delicious addition to salads, they’re rich in important vitamins and minerals. They outrank spinach for iron content and have higher nutritional value than the beetroot itself. Spread your favourite bread with a helping of this brightly coloured hummus, garnish with a few chopped chives and you’ll be on your way to taste heaven. Get the recipe here.