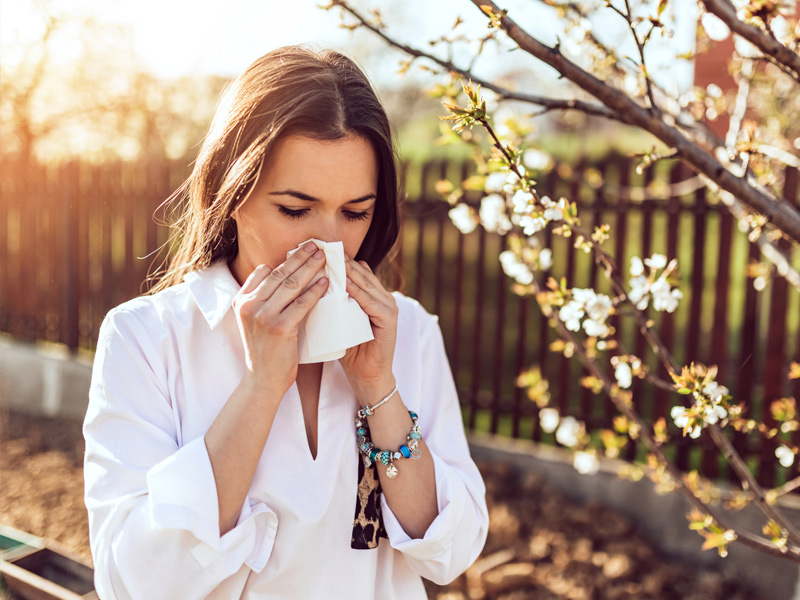 Is that runny nose hay fever or Covid-19?

Got an itchy throat, runny nose and headache? Don’t assume it’s an allergy as it’s never been more vital to know exactly what you’re dealing with.

What’s an easy way to cop a few dirty looks this year?

Simply be unfortunate enough to have a sneezing fit in the supermarket, or catch a cough that won’t go away.

With the trifecta of Covid-19, hay fever and the thunderstorm asthma season in full swing, it’s a tricky time to suffer allergies – and there’s also the potential to misdiagnose yourself.

Covid-19 and allergy symptoms are similar

Royal Melbourne Hospital and University of Melbourne allergy expert Professor Jo Douglass says some of the symptoms of hay fever can easily be confused with a mild case of Covid-19.

That includes a runny or blocked nose, or a scratchy throat.

Severe hay fever can have a big impact on young people, sitting exams, while others may need time off work.

Keep on top of your hay fever treatment

“What we’re saying to people is if you have symptoms of runny nose or sore throat or if you’re uncertain if it’s your regular hay fever or Covid-19, the important thing is to use your treatment,” he says.

If you’re susceptible, you should already be using your over-the-counter nasal cortisone spray.

“It’s best to start that at the beginning of the season, not wait until you get symptoms,” Prof Wark, a respiratory physician, says.

“It has to reduce the inflammation in your nose and eyes and this takes about one to two weeks to have its maximal effect.”

Symptoms to watch for

If your hay fever treatment has the usual effect, no problems, Prof Douglass says.

“But if there’s any doubt that it’s not your usual symptoms, that it doesn’t come under control with your usual treatment, then you need to be tested (for Covid).”

Prof Douglass also notes that despite its name, running a temperature is not a symptom of hay fever.

So if you do have a fever, get tested.

How to manage your hay fever

“Take it every day, and that way people won’t get the severe symptoms of hay fever and that also works for eye symptoms as well,” she says.

And on “those terrible north wind days when everyone’s suffering”, Prof Douglass suggests adding an antihistamine to the mix.

Prof Wark says many people don’t realise you’ve got to use a preventer every day for it to work properly, but also be using it the right way.

“Often people just stick it up the nose and spray and then they get problems like nasal bleeding, and stop them,” he says.

“So it’s important to either read the inserts or have a look at some videos on the National Asthma Council website that tell you how to use the device.”

And for more severe hay fever, consult your GP or a specialist.