Some sage advice from her grandma helps The Block co-host Shelley Craft juggle a demanding career with motherhood.

“Be kind to yourself.”

TV presenter Shelley Craft is not sure her grandmother ever actually said that, but she’s confident it’s something she might have said – so it’s good enough.

“I think if she looked back, she would say, ‘Don’t sweat the small stuff, take life as it comes’. We get so caught up in all the little things,” Shelley, 43, says.

“I’m sure every grandma looks back and wishes they’d been more present. I think she would have also said, ‘Have that extra piece of cake’.”

It’s a philosophy Shelley has applied to her 20-plus-year career in television, and her even more important role as a wife and mother to two daughters.

Sure, life gets hectic but Shelley projects a relaxed, friendly energy and is well-regarded as one of the nicest, most authentic personalities in the industry.

I’ve had a stack of inquiries about the jeans I wore on Wednesday night. Glad to help and tell you they are actually my favorite of all times. They are actually denim/ Trackypants!!! The bomb!! #dieseljeans fayza-c-ne check the next photos for style deets xx Happy shopping!!! And enjoy the first real room reveal tonight!! Can’t wait to hear what the judges have to say?!???! @theblock #theblock

How Shelley juggles parenthood with a public profile

“It’s just routine for me and my family,” she says.

When The Block is filming she jets between her base in Byron Bay in northern NSW and Melbourne each week.

At other times she’ll be occupied with school drop-offs, canteen duty and classroom help.

“For me it’s about balance,” she says. “Not trying to find that balance on a daily or weekly basis, but if you have that throughout a year. Family time or holidays is very much locked in.”

Shelley is an avid traveller.

Over the years her job has taken her to exotic locations around the world (she worked as a reporter on The Great Outdoors and is an ambassador for travel company Trip A Deal), and she loves taking her family and discovering new adventures.

“Travelling does open your eyes to many other opportunities, and I try to look at things from all angles. But travelling a lot makes you appreciate home more. Being home in my sanctuary is very important to me,” she says.

What a show!!! Disney on Ice was amazing! And is year after year. All of our favourites in one fabulous show!! There’s still time to catch the show around the country. Check www.disneyonice.com for details. @disneyonice #disneyonice2018

Like a lot of mums, Shelley, who shares daughters Milla, 8, and Eadie, 6, with husband Christian, has learned a lot about herself since becoming a parent.

“I’m more of a perfectionist than I ever thought,” she says.

But know when to let it go

Shelley says learning to forgive yourself is a key parenting lesson.

“You’re not always perfect and hindsight is a wonderful thing,” she says.

“Be kind with yourself with how you handle things. We’re still human. Our kids are human and we’re human. You’re not always going to get it right.”

As hard as parenting can be, Shelley revels in spending time with her girls and watching them grow.

“I’m loving watching the girls get older. I’m not wishing away their childhood, but the most rewarding is when other people comment, or they’re happy in themselves and they’ve come home and excited about something, when they realise their own potential,” she says.

For more from Shelley, pick up the October edition of The House of Wellness liftout from your local Chemist Warehouse store. 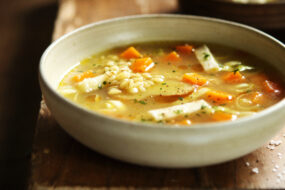