How to help your child switch from primary to high school

The step up from primary to secondary school can be exciting – or terrifying – for children and parents alike. A psychologist tells how to make it a smooth transition.

Children go through many leaps throughout childhood, but one of the most significant is the jump from primary to secondary school.

It can be a time of much uncertainty, but child psychologist Jaimie Bloch says there are plenty of positives to focus on and tips to make the transition smoother.

And communication and preparation are key.

“Parents need to be openly communicating with their children and bringing things to their child’s awareness,” Jaimie says.

“Children go through different emotions, worries and challenges internally they might not have the words to express, so it’s important parents bring them into the fold.”

She says in addition to emotional concerns, it is also a time for huge physical leaps.

“They go back to very egocentric thinking, like being two-year-olds again.

“Parents need to know what they’re spitting out isn’t about you, it’s about them.”

High school can come as a shock to the system – for kids and parents.

There are more subjects with more teachers, increased homework expectations, more challenging work, demands of getting to different classrooms on time, and even carrying their own laptops or books between classes.

Making sure children are familiar with their new surroundings is crucial, Jaimie says.

“Being able to orientate to a new campus and an idea of multiple teachers can be quite overwhelming as well as the expectation of workloads, exams and stress.”

If starting to use public transport to get to school, it may be the first time your child has had to use a ticketing system on their own.

Others will have to learn how to change trains or trams and walking to their school without mum or dad’s direction.

Jaimie says there is often less “hand-holding” when children travel to secondary school.

“Do the trips with your child then teach them to do it themselves,” she says.

“Talk about things involved. Do they have a ticket with money on it, how to put money on it, what are the routes?”

Back to being the ‘little kids’ of school

Going from being the “big kids” of the school to the “small fish in the pond” can also be a tricky situation for children to navigate.

There is comfort in having got to know primary school friends over time and the confidence that comes with being in the oldest year level on campus.

This can take a hit if jumping to a whole new school, being the youngest once more and especially if having to make all new friends from scratch again.

“Talk to kids about how they’re feeling about this and acknowledge it,” Jamie says.

The positives of starting high school

While many of the aspects of leaving primary school can seem challenging, parents should try to make it fun and exciting, Jaimie says.

“Highlight what new opportunities there are,” he says.

“It’s a time where children can specialise and pick things they enjoy doing. It’s a time of identity formation.”

Having at least one friend from primary school starting at the same high school inevitably makes those early days less daunting.

But not all children have this luxury, with some thrown in the deep end and forced to make new connections.

Jaimie says while making new friends can be daunting, it can also be exciting.

“Find out if there is a buddy system and encourage the child to be involved,” he says.

“Remind them just because they’re at a new school, it doesn’t mean they can’t still be friends with old friends.”

Lap up the last summer

Jaimie says it is important parents ensure children have a fun summer before school starts.

It is important, too, to stay in touch with primary school friends over these school holidays before high school begins.

“It’s such a beautiful time for identity and change,” she says.

“Spend time with friends, and get plenty of physical activity and sleep. Show you’re excited for your child to become a young adult.” 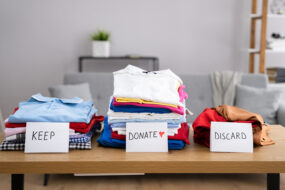