WELLBEING  /  Inspiring Stories  /  House Heroes: One of a kind

House Heroes: One of a kind

Lily Harrison is only 16, but she’s already making a huge difference to the lives of homeless and vulnerable women in her community.

Inspired by the Share the Dignity initiative in Sydney, the warm-hearted year 10 student from Byron Bay has set up PeriodPack to provide essentials such as pads, tampons, soap, toothbrushes, toothpaste and maternity goods to women in need.

“When it comes to a choice between food and sanitary pads, most often it’s food,” says Lily, who writes to companies every week asking for toiletries for women who can’t access or afford them.

Lily and her friends then create care packages that are distributed to community and homeless centres, soup kitchens, women’s refuge centres and women’s health facilities in Byron Bay, Lismore, Brunswick Heads and the surrounding areas.

“The joy on their faces and having something to give to these people and the stories that they bring back to me, it makes me feel like I’ve done something,” Lily tells the House of Wellness TV show.

Although Lily only started PeriodPack last year, more than 250 women have already benefited.

It was unusual to meet a young woman of Lily’s age who was doing so much for others – she’s incredible.

Lily says many of the region’s homeless women aren’t those you see on the street, but rather “the hidden faces”.

Denise Alison, who featured Lily in her Humans of Lismore Facebook series, is full of praise for the inspiring young woman.

“I got really emotional because it was unusual to meet a young woman of Lily’s age who was doing so much for others – she’s incredible,” Denise says.

How you can help PeriodPack

Lily, who is also active with the Byron Bay Surf Club, is an ambassador for One Girl (which provides scholarships to girls in Africa), and volunteers for the Blood Bank, is urging others to get involved in her cause.

“A lot of donations I get from businesses are one off, so I’m trying to find some continual support,” Lily says.

“All money and products donated go straight back to the women, there’s no middle person,” she says.

“This is something I can do that helps other people. It doesn’t take a whole lot of extra time out of my day and it gives back to the community and to people who need a helping hand.”

Learn more about PeriodPack and see more of our inspirational House Heroes. 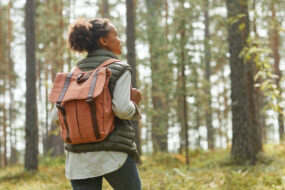