Defeat: It’s not a dirty word

Nobody likes to lose, but being defeated – in love, at work or on the sports field – is an important life lesson.

Maybe you went for a promotion at work and a colleague beat you to the new position and bigger salary.

Perhaps your footy or netball team reached the grand final and were smashed by the opposition.

Or maybe you took an exam and your result wasn’t as spectacular as you expected.

At some time in our life, all of us face defeat. In fact, chances are it’s an experience we’ll have to deal with many times.

All is not lost

“One of my favourite quotes of all time is from the Dalai Lama, who says ‘failure is our greatest teacher’. He also says, ‘when you lose, don’t lose the lesson’,” says Mandy.

“Defeat is a huge opportunity to learn, but too many people are afraid of failure and defeat.

“At work, in school and in our relationships, we often don’t realise that to fail is to be human.”

How to cope with defeat

Facing defeat inevitably triggers emotions ranging from disappointment and anger to sadness, anxiety and a sense of loss.

But after those emotions pass, how can you turn defeat into something positive?

“Ask yourself what could I learn from this? What does this mean for me now? Do I need to reassess my goals? What changes can I make? Who can support me and who can I talk to about this?” says Mandy.

“After a defeat can be a time when you learn who will be there for you when you need them.”

Be kind to yourself

“Often after a defeat, people can think, I should have done this or that, why did I do this?” she says.

“They beat themselves up but if you focus on the things you fail at, you lose your confidence.”

Look at your personal balance sheet

Write down what you are good at and what you have achieved in your life so far.

You might have been defeated at something recently, but balance that with all the positives you’ve achieved.

“Defeat often means you have to change your ideas about something or take a different direction and that can be scary at first,” says Mandy.

“But if you are afraid of defeat, you miss out on opportunities.” 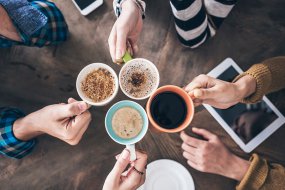